Multiple reaction monitoring (MRM, also known as Selective Reaction Monitoring – SRM) is a highly specific and sensitive mass spectrometry technique that can selectively quantify compounds within complex mixtures. This technique uses a triple quadrupole MS that firstly targets the ion corresponding to the compound of interest with subsequent fragmentation of that target ion to produce a range of daughter ions. One (or more) of these fragment daughter ions can be selected for quantitation purposes. Only compounds that meet both these criteria, i.e. specific parent ion and specific daughter ions corresponding to the mass of the molecule of interest are isolated within the mass spectrometer. By ignoring all other ions that flow into the mass spectrometer the experiment gains sensitivity, whilst maintaining exquisite accuracy.

MRM is performed for selection of specific analytes and absolute quantitation of proteins, peptides, metabolites and lipids from plasma, serum and other biological samples.

What type of samples can be analysed?

Essentially any compound that can be ionized and then fragmented can be used for MRM analysis. The most typical examples being the measurement of proteins and peptides, metabolites, or drugs in complex mixtures such as plasma and serum. Quantitation of proteins is possible through the MRM experiment on digested peptides that correspond to the protein of interest. This makes MRM analysis a common choice for detection and quantitation in Biomarker analysis. As the name suggests more than one MRM can be monitored per analysis allowing detection of multiple compounds in the same experiment.

How sensitive is MRM?

Is MRM compatible with absolute or relative quantitation?

Yes. Each project is specific and requires considerable amounts of operator time to develop and run the MRM analysis. For complex mixtures some sample clean up may be required with significant chromatographic separation. For plasma and serum extra preparation work is required and additional fees will be charged.

This article describes the development and implementation of an MRM based method to determine relative quantities of two proteins (cardiac and skeletal actin) which differ in only 4 residues out of 375 in their sequences, i.e. they are 99% homolgous. The proteins were processed together and specific MRMs developed that would detect the presence of each form sensitively and specifically. Only relative quantitation was required for this application.

Proteomics International has developed an MRM application to detect the presence of a 9 residue peptide (mass 1023.8) and its lipidated form (mass 1899.8). Pure standards of each were supplied allowing optimisation of the mass spectrometric conditions specific to each compound. Once MRM transitions were decided then calibration curves were derived for injections of known amounts of each. This allowed quantitation of the amounts of these peptides present in the samples to be analysed. The solutions these samples were in was not complex and hence a direct injection approach was applicable with no chromatographic separation before mass spectrometric analysis. Due to the large sample number and high throughput requirements this MRM experiment was performed using an Agilent 1100 system with a flow rate of 200 mL/min into the Turbo-V source of the 4000 Q TRAP. This is less sensitive than the nanospray interface but more than adequate for the application as approximately 10 ng or lower pmole amounts were accurately quantifiable with a sample run time of 2 min. 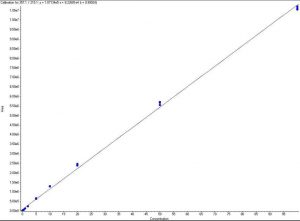